Menu
Home/Portraits/Anne Bianchi: the art of clearing the mind 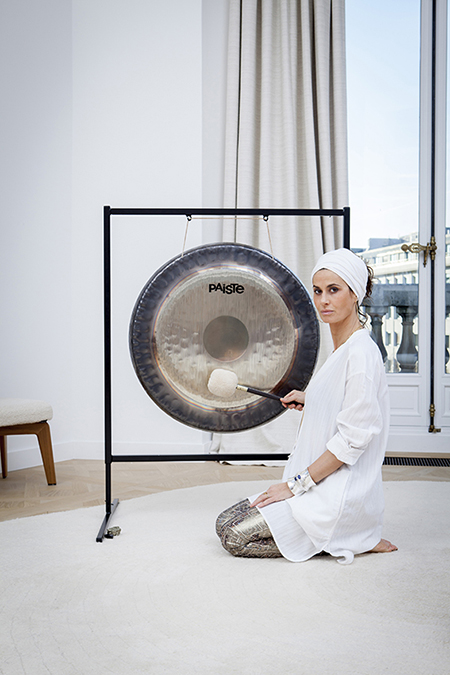 I met Anne Bianchi in her previous life, when she was a journalist. I did not know that she, a tall brunette with a model’s figure, had been selected to sit France’s most prestigious public education examination because of her excellence at Italian, and that she was interested in much more than the latest make-up trends and hit bags that her job as editor-in-chief of women’s magazines obliged her to cover.

Now Anne is a Kundalini teacher in Paris. Since we last met, then, she has answered the existential question that stumps many of us: “I know what I don’t want to do any more, but what do I want to do?”. How did she find the right response? By conducting a clear-out. A complete one. No half-measures. She got rid of everything, No more useless occupations. No more schedule. No more appointments. Instead she replaced all that with yoga, meditation and a few happy encounters. And she did all that while remaining rooted in her Parisian life, without withdrawing from the world. So it’s possible!

After the emptying phase, she still had not found the answer. Her first move was to go back to ‘school’. She trained up. In Paris, with highly reputed psychotherapists, she studied Gestalt Therapy and Sex Therapy. And in Italy she learned from Kundalini yogis (Anne discovered Kundalini with the marvellous Caroline Benezet). Two different, but complementary, fields of practice.

Anne has rebalanced her life. And it truly is hers. She has achieved equilibrium with the right measure of what she is, with that eye that she never lost for the world of brands and fashion. Soon she will be available to listen to others as a therapist (a few qualifications still have to be ticked off). And her new pupils benefit from the movements she shows them now that she is, officially, a Kundalini yoga teacher. Her path shows us one of the routes to one’s self: silence and emptiness. This is universally available, but not easy to put into practice.