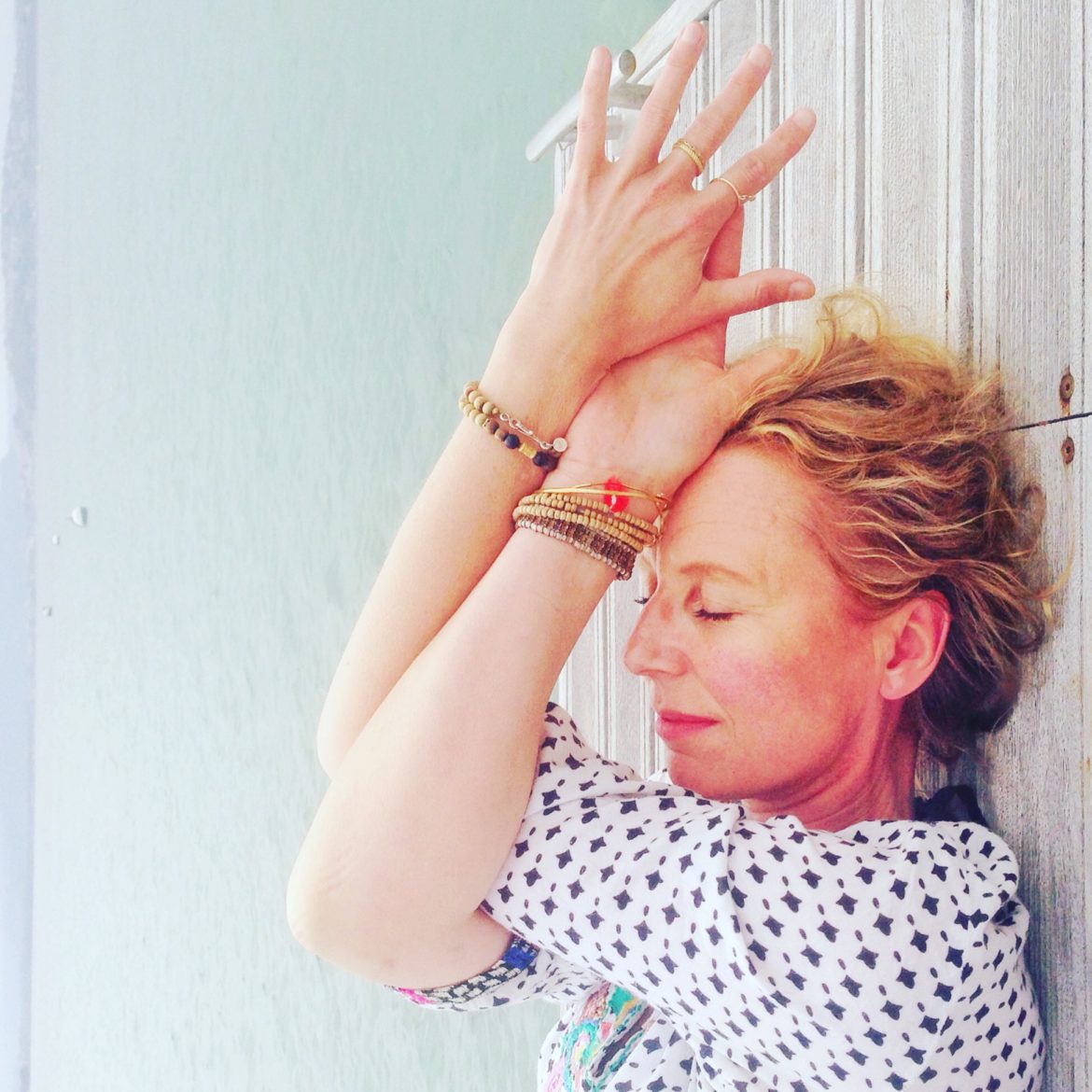 Some yogi path are expected, some are linear, some are serpentine….when you are sitting in front of Anne Vandewalle, you are struck by her clarity. All of her is bright. Lit from the inside. This light irradiates. One is attracted. And you feel very protected. But who is this Yoga teacher? From where does she get these wondering “powers”?

Anne was born in a quite classical family, in North of France, near Lille. When she was a child, she was struck by one of her older sister’s choice, who left for India with an English husband. Then for Nepal, to experiment a real Hippie life, children included. This original family was both confusing and fascinating. As is everything different. Anne stored images of unfazed yogis in her parents’ living room. With a point of surprise.

Later, she follows a much wiser path and starts a gorgeous career of Marketing specialist in one of the most famous Agency in New York. When she settles in this city, she is twenty-four years old and everything smiles to her. One day, in 2000, she does sun salutations during holydays in Bali. When she comes back to NY, she registers in Jivamukti Center and starts practicing yoga.

Seven years later, a visa problem abruptly stops the flow of this comfortable and carefree life. Her agency sends her to Philippines as they are trying to fix this and find a solution. Anne lives here her first existential chock when she goes to the Garbage Dump of Manilla with a filmmaker. Her life will never be the same.

A trial-and-error period of life starts: she goes sailing in the Caribbean seas, goes back to Paris for job interviews, spends the summer in Marocco, and starts to think about a six months trip in India and Asia. In September 2001, when she comes back to Paris, World Trade Center towers collapse. For Ann, her world collapsed: she is not any more an Account Manager in a beautiful agency, she is far away from her friends and beloved, and New York is not anymore the City of Light in which she had so much fun.

It’s not anymore question about leaving to East. In Paris, she improvises: she takes Photo classes, massage classes, yoga classes. She decides to go to Bahamas to follow a two-hundred yoga teacher training. Just for herself. To practice. We are in January 2002. There she meets Krishna Das. She is “ravished” by singing practice: Bhakti. Anne goes back to New York. Without any visa this time. Without any job. She will even be a waitress in a Vegie Restaurant. The name of the Restaurant is Caravan of Dreams. The owner’s name: Angel. Good stars are setting up.

In New York, she blooms in her new Bohemian life. One day, she goes to an Elena Brower class and it’s like pure truth. The first, because there will be others on this new path. It’s decided: she wants to be a yoga teacher. And she wants to teach in the same spirit than Elena Brower. She is going to follow her teaching during several months. Then she will meet John Friend, Anusara Yoga founder. And will go back and forth between New-York, Mexico and Bahamas (again), at the rate of her various classes and jobs, more or less nice.

One day, in 2003, India becomes necessary. We think about her sister who must have discreetly smiled when she heard about this new journey. Anne left for North Himalaya. There she met a new Master. A new essential step.

She started to teach yoga in France in September 2004, three years after the tragic events of 9 Eleven. Since then, she completed her Yogi path with Ayurvedic medicine training. Seriously. With Method. Like she did in her first life. She regularly creates events in European capitals. And she launched in September 2017 a video program very well thought for those who don’t have time to go in a studio: YOGAPLAY.

Above all, Anne is a friend. A generous soul who offers everything and doesn’t keep anything for her. She is deeply enrolled in her community. Community of her peers, community of her friends and community of her students. She teaches in Paris at Le Tigre Yoga, at Big Apple, at Be Yoga, and once a month, Saturday morning at the American Church (of Paris). She also organizes retreats in France or in India. We strongly recommend you to go and meet her….And I think if I felt so much protected it’s mainly because Anne is a healing lady. An healing soul who cures without even knowing it.